Beer has been brewed on Fuller’s historic Griffin Brewery site in Chiswick since the seventeenth century. From the original brewery in the gardens of Bedford House on Chiswick Mall, the business expanded and thrived until the early part of the nineteenth century. Money problems forced the owners, Douglas and Henry Thompson and Philip Wood, to seek a partner. John Fuller, of Neston Park, Wiltshire was approached to see if he would inject the required amount of money. In 1829 he joined the enterprise, but the partnership proved a difficult one and in 1841 Douglas Thompson fled to France and the partnership was dissolved. It became apparent that it was difficult for one man with no brewing experience to run a brewery of that size alone. In 1845 John Fuller’s son, John Bird Fuller, was joined by Henry Smith from the Romford Brewery of Ind & Smith and his brother-in-law, head brewer John Turner, thereby forming Fuller, Smith & Turner.

In January of 2019 it was announced that Fuller, Smith & Turner Plc had agreed the sale of their drinks company (The Fuller’s Griffin Brewery, Cornish Orchards, Dark Star Brewery & Nectar Imports) to Asahi . The sale was completed in April of 2019 for £250m. Asahi stated that it would continue to brew beer at the Griffin brewery.

All the taste, with less alcohol

If you’re looking for all the great taste of one of our beers without the alcohol content, we’ve got a range of refreshing drinks at up to 1.2% ABV. Crafted by expert brewers to ensure maximum flavour, we stock brews including Erdinger, BrewDog and Heineken.

A dark past isn’t always a bad thing. Back in 1910, dark, rich stouts were at the peak of their popularity, and there’s many a brewer and a beer lover who yearn for those days again. So, we’ve delved into our famous recipe books to bring back 1910 Double Stout — a shining beacon of British brewing

Brewed with the knowledge of London’s oldest family brewer, Fuller’s Black Cab is a rich, dark stout that transports you to a time gone by. London was famous for stouts in the 19th century — and we’re on a journey to make that the case again

A famous old saying claims ‘a recipe has no soul’ – but the formula for our XX Strong Ale is an exception to that rule. Inked by the hands of our forefathers in September 1891, this recipe is an heirloom from the Fuller’s Brew Book, rekindled for the Past Masters series

Loved, lost and seemingly confined to the history books, Old Burton Extra was first brewed at Fuller’s in 1931. Now it’s back as part of our Past Masters series – and we’re using the original recipe to recreate those big, bold Burton malt flavours

Giving a nod towards London’s darkest landmark, Traitors’ Gate is a winter ale executed to perfection. It’s named after the entrance to the Tower of London – and it’s one of the jewels in Fuller’s seasonal crown

The perfect pick-me-up after a trying winter, Fuller’s Fools Gold is a spring seasonal to treasure. Brewed with the new Jester hop, it’s a golden, fruity ale guaranteed to bring a smile to your face

’Tis the season of giving — and as St Nick always delivers the goods in December, we thought it was our turn to give a little something back. For every pint we sell of this full-flavoured Christmas cracker, we’ll donate to our local church in Chiswick — the church of St Nicholas, of course…

First seen in autumn 1999, Fuller’s Red Fox is back on the bars this year with that same rich, red ruby colour and toasted oats flavour that make it the perfect pint for the season of mists and mellow fruitfulness. Enjoy

The latest Fuller’s ale to make its bow, Oliver’s Island is a crisp, thirst quenching beer that draws inspiration from a local landmark. Every day, rowers glide serenely past the Griffin Brewery towards the island in the Thames — reminding us just what can be achieved by pulling together…

Inspired by the classic India Pale Ales of times gone by, Fuller’s Bengal Lancer redefines Eastern promise. With a full-bodied flavour and spicy character, it’s an IPA that grabs the reins and leads from the front

A malty, warming ale to melt away your winter blues, Fuller’s Jack Frost is the ideal companion for the season of sanctuary. Take refuge in the pub with this brilliantly robust brew, full of fruity flavour

Twice named World Champion Beer, Fuller’s ESB is one of the most decorated ales of its time. A winner born and brewed, it’s a strong, full-bodied ale that has delighted drinkers for decades with its smooth, mellow bitterness and superbly satisfying finish

Montana — known the world over for its wild, natural beauty. A place where rugged earth forges mountain peaks and waterfalls, and where all manner of flora and fauna thrive. The perfect namesake then, for our naturally beautiful beer

Named after the part of London we call home, Chiswick Bitter is well and truly part of the Fuller’s furniture. It’s a flowery, fresh, famous bitter that’s been in our pubs since 1930 – because when you love something, you should never let it go

Pale ales have been around for generations — but never has there been one so uniquely British as this late-summer seasonal from Fuller’s. Brewed by the Thames, using only the finest UK ingredients, it’s the Quintessential British pale ale, from the quintessential British brewer

Deliciously refreshing, Fuller’s Summer Ale is the signal that heralds the start of warmer weather. They say one swallow doesn’t make a summer, but your first swig of this crisp blonde ale might just prove otherwise. Individuali veikla — Finansinės nepriklausomybės pradžia uzsidirbu.lt

A strong, rich and fruity ale, Fuller’s 1845 was specially commissioned to celebrate 150 years of the Fuller, Smith and Turner partnership. It’s a live, bottle-conditioned beer, skilfully brewed to mature over time

We’ve never been afraid of innovation, and Frontier, our new wave craft lager, speaks volumes to our pioneering spirit. Our brewers have been on a quest to create a more refreshing, more characterful lager – and Frontier is the ground-breaking result

One of our best-loved seasonal ales, Spring Sprinter’s popularity has grown in leaps and bounds since its first run in 2011. Light, zesty and refreshing, this is a pale amber ale with a real spring in its step

Released for the first time in 2013, Brit Hop is a fruity, flowery ale brewed with a medley of eight English hops. It’s a festival of flavour, with all the ingredients to become one of our centre-stage seasonals

Since making its debut in February 2011, Front Row has become a key player in Fuller’s seasonal squad of beers. It’s a balanced, refreshing ale with moreish biscuit malts — making it the perfect pint for any rugby occasion

Riding the wave of the US craft beer movement, Wild River is an exciting take on American Pale Ale. It’s a double-hopped brew made with several Californian hops – a golden beer inspired by The Golden State

Brewed under the watchful eye of our Griffin since the 1950s, London Pride is unmistakably London’s beer. With its well-rounded flavour and rich history, everything about this authentic, characterful beer binds it to our capital city and the people who love it

Back when Fuller’s originally brewed Double Stout, stout simply meant strong. Now, of course, in modern brewing parlance, stout is a style all of its own. It’s to be expected that a few things have changed in that time though – we first brewed it in 1893

The fourth Past Masters recipe resurrected from Fuller’s record books, 1966 Strong Ale is a dark ruby beer that delivers rich plum flavours, a sumptuous velvety finish — and more than a hint of nostalgia

Wonderfully comforting in colder weather, Old Winter Ale is a dark and distinctive beer that wraps you in a warm glow of familiarity. Unlike most things in the season of snow, sleet and ice, it’s exceptionally well balanced

Brewer’s Reserve No.4 starts its story across the Channel, in the Bas region of France. It’s there that one of the finest, rarest Armagnacs, Comte de Lauvia, is made – and it’s there we travelled to bring the old Armagnac casks back to Griffin Brewery

It can take a long time for beer to mature in an old whisky cask — more than two years, in the case of Brewer’s Reserve No.3. By the time it was ready, our brewers were a little greyer, a little wiser – and adamant it was well worth the wait

Hidden in the cellars of Griffin Brewery, twenty fine cognac casks sat silently for a year. Inside them wasn’t brandy, but beer – Fuller’s Brewer’s Reserve No.2 – slowly but surely absorbing luxurious flavours from the solid oak surroundings

Over a late night dram one winter evening, Fuller’s Head Brewer, John Keeling, and a certain Master Distiller pondered a new concept in beer. A strong ale with the characteristics of a spirit. Some four years and several whisky casks later, Brewer’s Reserve No.1 was born

Inspired by classic IPAs of the past, Fuller’s India Pale Ale is a refreshing affair with spicy hop character. Like its 19th century predecessors, exported to the east, this pale ale too is destined for foreign shores

Brewed in the authentic style of the 18th century classic, Fuller’s limited edition Imperial Stout is a darkly delicious affair – with an infusion of rose buds giving rise to hints of Turkish delight

Everybody loves a pint but good things come in smaller measures too. Golden Pride is a premium, superior-strength bottled ale, bursting with flavours of sweet orange oil and toasted grains. At 8.5% ABV, it’s to be savoured like a fine wine

The next best thing to a dip in the sea, Beachcomber is a light, golden ale that brings cool refreshment to a warm summer’s day. Like footprints in the sand though, this seasonal won’t be around for long. Grab a pint while you can

They say variety is the spice of life, and Firecracker certainly brings a whole new drinking experience to the bar. Brewed with a secret blend of real spices, this Gales seasonal is one to light up dark winter evenings

The latest branch on our family tree of seasonal ales, Gales Redwood is a red beer that soars in spring time. Every bit as impressive as its natural namesake, the fruity, spicy Redwood is one of the boldest 4% beers you’ll find

Launched in support of the UK’s leading maritime charity, Gales Seafarers made its maiden voyage in 2005. A crisp, light and quenching amber ale, it continues to be the easiest, most refreshing charity work you’ll ever do 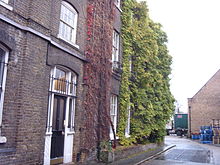 The wisteria plant at the Griffin brewery 2008

The first record of the Griffin Brewery in Chiswick dates from 1816, when one of the owners of the company at the time, Douglas Thompson, acquired the name from a failed brewery (Meux & Reid) in the City of London. As well as its range of beers, The Griffin Brewery, on the A4 in Chiswick, is famous for having the oldest wisteria plant in the UK, planted in 1816. The public can take a guided tour of the site.